Energy consumption has had a rapid growth in the last years. Therefore, the government has planned to radically reform the subsidy system and taken major steps to persuade consumers into consuming energy efficiently. Greenhouses are where it is important to have an efficient use of energy.

It is unfortunate to say that convective heating methods like heaters, including those used in workplaces and furnaces, gas brooders and other invented machines, which all lead to mass waste of energy through ceiling and walls because of upward heat transmission, are being used in greenhouses throughout the country.

Years of having radiant heating systems at both global and domestic levels leaves no doubt that using the heating equipment produced by ‘Garmataab’ leads to efficient fuel consumption.

‘Garmataab’ is the Persian equivalent for radiant heater, a machine in which natural gas flowing in a pipe is burnt at a high temperature by a special heater. The heat produced turns into infra-red waves and then reflects on certain points by the trapezium-shaped reflector resulting in a great feeling like sun heat. The main parts of this machine are a special radiant heater, radiant pipes, a reflector and a fan. IRAN MASHAL Co. ‘Garmataab’ certified by ‘AmbiRad’ has been able to do various projects successfully. The parts used in the machines produced by the company are either made in England or Italy in accordance with the European standard BS EN416-1:1999. Furthermore, the radiant pipes and reflectors are made out of a special alloy of stainless steel with a special color. It is worth mentioning that the special fan of the machine powered by an Italian electromotor makes it possible to have high combustion output through having suitable static pressure.

It is approved by the U.S. National Greenhouse Manufacturers Association that using the radiant heating system is efficient due to the fact that the temperature of the soil is higher than the environment. 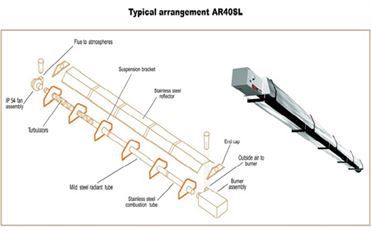 Convective heating method leads to mass waste of energy through ceiling and walls because of upward heat transmission. In this method, the temperature of the plant’s surface would be less than of the greenhouse, which causes to have dews on the surface. Moreover, there would be drops, a reason for increasing the number of pests, and contagious diseases due to the plant being wet. It is worthy of mention that the temperature of the soil is not satisfactory provided in this method.

In radiant heating, heat is transmitted through infra-red waves, which are first reflected on the plant and then turn into energy. This method results in efficient fuel consumption, and there would be a low temperature under the ceiling. The heat produced in this method equals the one of the sun. It should be mentioned that the soil and plant’s temperature is a little bit more than the one of the greenhouse, which finally prevents contagious diseases because of the surface of the plant being wet and air circulation.

50 and 90 percent reduction in fuel and electricity consumption respectively is the most important advantage of the machine produced by ‘Garmataab’ being compared with other common machines being used in greenhouses. This is something proven by the measures taken.

Advantages of Using ‘Garmataab’ in Greenhouses

Capable of high radiation suitable for halls with high ceilings 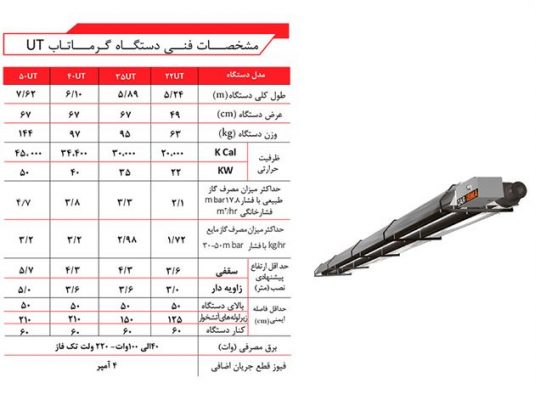 Long and suitable for halls with low ceilings 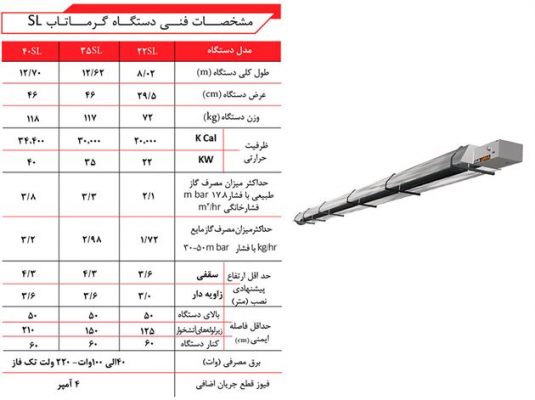 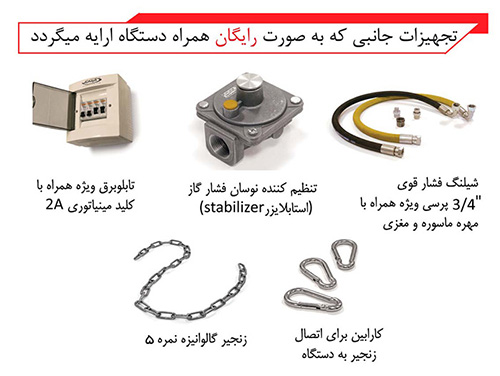